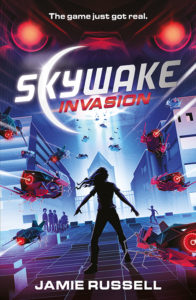 The first book in the trilogy, SKYWAKE: INVASION will be published in March 2021.

Fifteen-year-old girl gamer Casey Henderson is obsessed with smash-hit game SkyWake – and she’s good at it, too. Little does she realize it’s actually an alien training tool created by the mysterious extra-terrestrial Red-Eyes. When the aliens swoop down on a national gaming tournament, Casey and her teammates discover they’re abducting the best gamers to fight in a distant alien war across the galaxy. Casey’s gaming skills are her best hope of stopping the aliens and rescuing her little brother – but first she and her online teammates must learn to work together in real life…

Aimed at kids who are too busy playing Fortnite to read Harry Potter, it’s an action-packed story of videogames, aliens, teamwork and one girl’s journey to believe in herself.

When author Jamie Russell was five, he saw a Space Invaders machine in a greasy fish and chip shop at the seaside. It blew his mind and started a lifelong love affair with videogames. He has worked as a film critic for Total Film magazine and written for videogame magazine EDGE. He has written several non-fiction books including one about zombies and another about Hollywood’s love/hate relationship with games. He has also worked as a speechwriter and narrative consultant for a big US tech company who swore him to secrecy. These days he divides his time between writing screenplays and playing endless games of Overwatch (he’s a Mercy main). He regularly pretends to let his two daughters beat him at Super Smash Bros, but the truth is they’re way better at it than he is.

Jamie Russell says: I am honoured and delighted to be working with Walker Books on this series. As a parent, I know what an incredible publishing house they are. My kids have worked their way through the Walker catalogue, from bear hunts to Middle Grade superspies to tales of teen vampires. Seeing SKYWAKE become part of this family is a dream come true and working with Emma Lidbury and the rest of the team has been an absolute delight.

Ella Kahn says: SKY WAKE is a fantastically original debut delivering page-turning action and heartfelt emotion, and it had me hooked from the very first line. Walker immediately saw its out-of-this-world potential and I’m absolutely delighted to have such a creative and passionate publisher on board to launch this series to intergalactic success!

Emma Lidbury says: SkyWake really does have everything – aliens, spaceships and super-smart gaming, with friendship and camaraderie at its core. Self-doubter Casey is an eminently relatable heroine who can achieve more than she ever expected with her team around her. This submission couldn’t have come at a better time: gaming is here to stay, and the middle grade market feels primed and ready for a brand new science fiction series. We’re excited to welcome Jamie to the Walker list and feel excited that SKYWAKE is just the beginning.