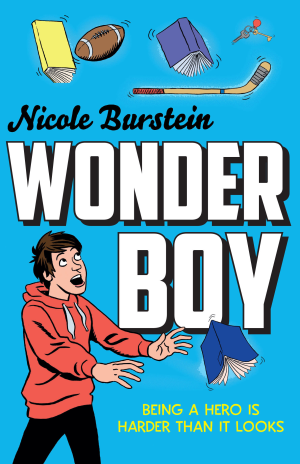 A funny and frank superhero story set in the world of Othergirl.

Joseph ‘Wilco’ Wilkes is one of life’s loser’s – he’s picked on, pushed around, and bullied by the rugby boys at the posh private school he attends on a scholarship. But his life is about to change: Wilco learns he can move things with his mind. Will this be his chance to play the hero, get the girl and finally stand up for himself? Or are things just going to come crashing down around his head? Becoming a proper hero will be quite the leap of faith…

"A tale of the underdog, there is no superhero more endearing than Wonderboy. This book recognises that being a hero isn't only about having special powers." The Sun

"A sharply-observed comedy of teen life, with a serious undertone. Amongst the comic-book action Burstein shows what heroism - the kind that calls for real courage – really is, and reminds readers that heroes and villains too are often those we least expect them to be." Andrea Reece, Lovereading4Kids

"Peppered with humour and heartache, this is another great book from a writer whose superpowers are empathy and imagination." Leilah Skelton, Waterstones Doncaster

"A plot that throws up more than a few surprising twists" Claire Hennessy, Irish Times

"Wonderboy is comedic without overdoing it, believable without being boring and above all; a thoroughly enjoyable read." Khadijah, age 20, for lovereading4kids.co.uk