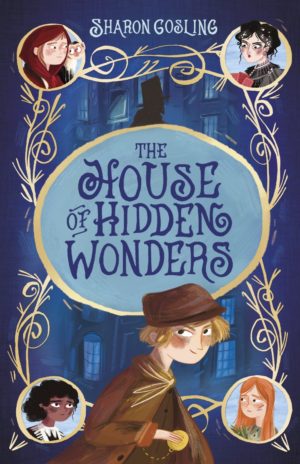 The House of Hidden Wonders

“Subterfuge will suit you, Zinnie, I know it already.”

When a ghostly figure is sighted in the murky tunnels beneath Edinburgh, Zinnie and her sisters suddenly find their underground home filled with curious visitors. Among them is the owner of a new museum – The House of Hidden Wonders – who seems to know more about the ‘ghost’ than he should.

As Zinnie discovers dark secrets concealed within the so-called House of Wonders, she throws herself into a world of intrigue, determined to uncover the real story behind the ghost. Can she shine a light on the truth or will the sinister forces against her prove too strong?

"In The House of Hidden Wonders Sharon Gosling shines a torch into the murky, but fascinating underworld of historic Edinburgh, and introduces a cast of feisty female role-models, from real-life doctor Sophia Jex Blake and the flamboyant Lady Sarah, to Zinnie herself, and each of her uniquely talented sisters. There are spooky and gory elements to this story, but they are deliciously spine-tingling rather than truly terrifying, and delivered with such a light touch that the readers feels (partially, though not completely) ‘in the know’ as Zinnie races to solve this dramatic mystery." Roaring Reads