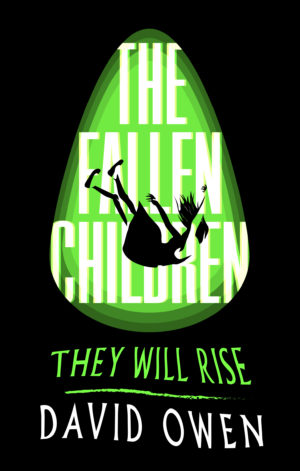 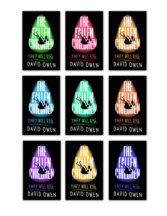 Young people on the Midwich Estate don’t have much hope for their futures. Keisha has lived there her whole life, and has been working hard to escape it; others have just accepted their lot.

One night, everyone inside Midwich Tower falls mysteriously unconscious in one inexplicable ‘Nightout’. No one can explain what happened during those lost hours, but soon afterwards Keisha and three other girls find they’re pregnant – and the babies are growing at an alarming rate.

As the news spreads around the tower, its residents turns against them and the situation spirals toward violence. Keisha’s life unravels as she realises that the pregnancy may not have just ruined her hopes for the future: she might be mother to the end of the world.

The Fallen Children is a story of violation, of judgment and of young people who must fight to defy what is expected of them.

The Fallen Children has one cover design but 360 different colourways. Each one is numbered from 1 to 360 on the spine. The colour you receive will be completely random.

'Haunting, supernatural and compelling.' A Little But A Lot Blog

'A blisteringly powerful take on the John Wyndham masterpiece and surely destined to be a modern classic in its own right.' Jo Boyles, Lounge Books

'I don't think anything I say will do this book the justice it deserves. It's intriguing, brilliantly written and bold. I love the supernatural and eerie elements, it's relevance to today's society, the realistic portrayal of teenagers and how they are treated. More than anything, I liked the character diversity and the fact there is also a strong parental presence, it makes a nice change and it was interesting to explore their different roles in the story and how they dealt with this chain of events in their own way. I thoroughly enjoyed the character development of the children, they're creepy and fascinating in equal measure, particularly the boy and how he was influenced by those around him, or the lack of influence at times. I think he was my favourite character. Overall I found the story compelling, I couldn't put it down from the moment I started it. Its fast paced and, by the end you'll be on the edge of your seat. Days after finishing it, I'm still just as eager to know what happened to them after the book ended. I can't recommend it enough, even if you're not a huge fan of the supernatural. The Fallen Children is my favourite book of the year so far, it's a must read!' BookDragon Blog

'Owen examines teenage credibility, mob mentality and how love, or the lack of it, shapes any kind of life. This is a riveting refashioning of a science fiction classic.' Imogen Russell Williams, The Guardian

‘David Owen's THE FALLEN CHILDREN is like a cross between Rosemary's Baby and Village of the Damned. Spooky! Loved [it].’ Alex Wheatle

‘THE FALLEN CHILDREN is ATTACK THE BLOCK meets VILLAGE OF THE DAMNED and feels like the London I know. It’s very cool.’ Juno Dawson

'The best book I've read in ages . . . At its surface, The Fallen Children is a pacy, gripping, intriguing superhero origin story, but beneath that, it's a poignant examination of the extent to which modern society spits on its young adults.' Alice Oseman, author of SOLITAIRE and RADIO SILENCE

‘The Fallen Children hits the ground running. From the spine-tingling opening few pages, through to the pitchfork Frankenstein-style mobs towards its ending, the tension never lets up, the twists keep coming like rapid bursts of gunfire. David has managed to bring a classic science fiction story up to speed, using his superb voice to pull out the hopelessness of many modern teens from poorer, working class backgrounds. It’s not all doom and gloom, though. Owen manages to sow seeds of hope, and each character is a joy to read – whip-crack sharp, honest and genuine. The way the whole plot builds to a crescendo is captivating as well… I could feel the pressure building in my chest as the last few pages came hurtling towards me. The only bad thing I can say about The Fallen Children is that I desperately wanted more.’ Shift Zine

I really enjoyed it as a mix of gritty contemporary realism and sci-fi thriller… It's pacy and exciting and a real page-turner.’ Irish Times

'I really enjoyed it as a mix of gritty contemporary realism and sci-fi thriller… It's pacy and exciting and a real page-turner.’ The Bookbag

‘A bizarre, mysterious, and hard-hitting book.’ Books and Endings

‘With supernatural, sci-fi themes, The Fallen Children is a fast-paced, unusual and unsettling story about young people challenging and rebelling against what’s expected of them. It’s the kind of intriguing novel that will thrill both older teens and adults.’ CultureFly

‘David Owen write[s] about contemporary teenage, racial and religious issues in an engrossing, unusual and unpatronizing way… this piece of literary DNA-splicing is a cracking read.’ SFX Magazine