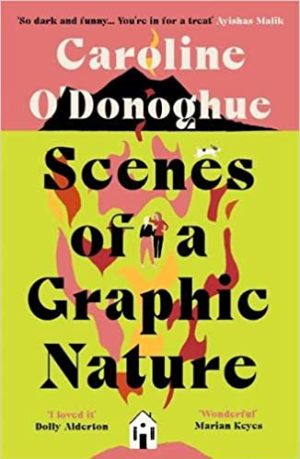 Scenes of a Graphic Nature

From the author of Promising Young Women comes a darkly comic and moving novel about going back to your roots – and digging up demons.

After a tough few years floundering around the British film industry, experimenting with amateur pornography and watching her father’s health rapidly decline, she and her best friend Laura journey to her ancestral home of Clipim, an island off the west coast of Ireland. Knowing this could be the last chance to connect with her dad’s history before she loses him, Charlie clings to the idea of her Irish roots offering some kind of solace. But she’ll find out her heritage is about more than clichés and clover-foamed Guinness.

When the girls arrive at Clipim, Charlie begins to question both her difficult relationship with Laura and her father’s childhood stories. Before long, she’s embroiled in a devastating conspiracy that’s been sixty years in the making . . . and it’s up to her to reveal the truth of it.

With a sharp eye and sour tongue, Caroline O’Donoghue delivers a delicious contemporary fable of prodigal return. Blisteringly honest, funny and moving, it grapples with love, friendship and the struggle of second-generation immigrants trying to belong.

"A witty story of second-generation immigrants trying to belong, it grapples with love, friendship and identity." Heat

"This is a darkly humorous, keenly observed blend of millennial drift and murder mystery from a razor-sharp writer." Sarra Manning, Red

“[Scenes of a Graphic Nature] offers us intricate, layered humanity. Charlie Regan, in all her messy glory, is a protagonist we are willing to follow, from England to Ireland, from the past to present, and everything in between this world and the next.” Lucy Kent, Lunate - A Literary Journal

"... crosses genres to create a rich, evocative novel with more than a few laughs." Woman's Way

"a darkly comic novel about going back to your roots." VIP Magazine

This novel is a kind of tragicomedy as well as a murder mystery and is in turns bawl-out-loud funny and vaguely disturbing." Sunday Irish Independent

"It's a meditation on identity, placelessness, the gravitational pull of ancestral vagueness, the enduring legacy of Irish secrecy, the awkwardness with which 'outsiders' search for answers, all wrapped up in a moreish mystery unfolding as a friendship between two young women." Irish Times

"By turns fluid and astute, the book showed an impressive grasp on femininity and thrummed with a ticklish relatability. It was described as echoing the tonal urgency of Phoebe Waller-Bridge or Lena Dunham, probably doing O'Donoghue a disservice in the process. But no matter; with Scenes of a Graphic Nature, O'Donoghue is making space for herself, and not just as the new anybody.” Irish Independent Review

“…an absorbing and compelling mystery that takes a nuanced view of contemporary Ireland and its historical failings.” Books Ireland

"The sophomore novel by Cork author and journalist Caroline O’Donoghue, 'Scenes of a Graphic Nature' ... might be the best novel of 2020." Eleanore Hutch, Evoke.ie

"With 'Scenes Of A Graphic Nature', Caroline O'Donoghue establishes herself as one of the most exciting young Irish writers on the literary scene. Her acerbic wit is matched by her sharp-eyed observations, resulting in a piece of fiction that is dark, gripping, and beautifully written." Louise O'Neill

"I was so hooked on this beautiful, funny story of homecoming and self-discovery I didn't want to put it down. The characters are wonderfully drawn and the sense of place is so compelling - it is a mystery, a fireside yarn. There is a little Maeve Binchy in there, a little Keyes, but Caroline has her own voice, and the edge to Charlie and Laura - their difficult, funny and recognisable relationship - is all her own." Keith Stuart, author of 'The Boy Made of Blocks'

"'Scenes Of A Graphic Nature' is a truly extraordinary novel - I inhaled it. It's thrillingly dark, but so moving and human - it's one of the most intelligent, well observed depictions of lust, loss, envy, betrayal, friendship and love that I've ever read. Charlie is so real, courageous, vulnerable, infuriating and adorable. The book itself mirrors Charlie's experience of Ireland - sometimes it's warm and joyous, sometimes it's hostile and terrifying, but even when you know you're in danger, you want to stay for longer and fall even deeper into the pages." Daisy Buchanan

"In the inventive O'Donoghue's follow-up to Promising Young Women, she turns her tart tongue on friendship, exile and what it feels like to return to a place that no longer feels like home." The i

"So dark and funny, bleak yet full of heart, touching on friendship and love and belonging ... you're in for a treat." Ayisha Malik

"Put this book somewhere safe, because it is set to be one of those you spend your life reading over and over - discovering new moments and new lessons each time. I've been a huge fan of Caroline O'Donoghue's writing for a long time and I think Scenes of a Graphic Nature - blisteringly funny and clever - is her best work yet. Raw, heartfelt and incredibly compelling, I can't recommend this enough." Lucy Vine, bestselling author of 'Hot Mess'

"The dark humour will have you guffawing into the pages." Cosmopolitan