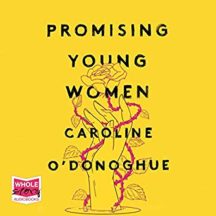 “I don’t know why it never occurs to me to ask for more: to be taken to dinner, or to be given a promise, or at the very least, an explanation of why things aren’t working out with his wife. I know exactly what Jolly would say: I know because I’ve written words to mistresses before. Hundreds of them.”

On the day of her 26th birthday, Jane is recently single, adrift at her job, and intrigued by why Clem – her much older, married boss – is singing to her.

Meanwhile her alter-ego, the online agony aunt Jolly Politely, has all the answers. She’s provided thousands of strangers with insightful and occasionally cutting insights to contemporary life’s most vexing questions.

When she and Clem kiss at a party, Jane does not follow the advice she would give to her readers as Jolly: instead she plunges head-first into an affair. One that could jeopardise her friendships, her career and even her life.

For readers of THE COWS, SWEETBITTER or CONVERSATIONS WITH FRIENDS – as well as for fans of FLEABAG or SEARCH PARTY – Caroline O’Donoghue’s debut is a gothic, darkly witty novel about sex, power, work and being a young woman in a man’s world.

"So brilliant ... It couldn't really be more timely ... Compelling and illuminating ... I highly recommend it." Dolly Alderton, The High Low Podcast

"I loved it. The writing is whipsmart and so witty and what Caroline O’Donoghue says about how women interact with men and work is fascinating. A fabulous and timely novel." Marian Keyes

"This debut shows that Caroline O'Donoghue is one of the brightest stars in the current galaxy of young Irish writers. Promising Young Women is funny, clever, upsetting, fierce and absolutely of its time. A future classic." Jane Casey

"Tinged with modern gothic, O'Donoghue's writing is deeply relatable and darkly comic, as she examines the interplay of power and sex in modern times. A story that couldn't be more fitting for 2018, it'll have you nodding with familiarity, thinking, laughing - and crying - as you race towards the end." Grazia

"I loved Promising Young Women. It's like Bluebeard crossed with The Yellow Wallpaper neck-deep in zeitgeist. If Angela Carter was stuck in a soulless corporate job this would be the dark, delicious result." Sharlene Teo, author of Ponti

"A powerful tale of manipulation and lust inside a male dominated workforce. Not unlike Louise O'Neill's Asking For It, once you go down the rabbit hole into this dark book, you won't be coming out until you've finished it." Evoke.ie Bookclub Top Five Summer Reads

"Promising Young Women is a book of two worlds - a light, current London of brunch and cocktails, spiraling into a gothic internal world of obsession, manipulation and fear. O'Donoghue writes the body in a hugely transporting way: if you have never felt like Jane in your own life, it will be impossible to not feel like her as you read this book - her illness and want and stasis and depression. Promising Young Women is a gothic spiral that I couldn't quite hold onto the walls of: a descent I was willing to tumble down. I loved it." Sarah Maria Griffin

"A darkly funny novel with a gothic twist about surviving the workplace, modern feminism, and the power dynamics that come with relationships." Independent

"Chillingly oh-so-relatable for many women." Wear and Where.co.uk, Best Books 2018

"This is the cleverest, funniest and most assured debut novel I've ever read. Caroline O'Donoghue is enormously talented, but wears her talent lightly - this book is deceptively, seductively charming and easy, before it turns deliciously dark. It's bold, knowing and so smart - fans of Nancy Mitford or Jay McInerney will adore this, but O'Donoghue's voice is absolutely her own." Daisy Buchanan, author of How to be a Grown-Up

"Anyone who enjoyed Jami Attenberg's All Grown Up or Sally Rooney's Conversations With Friends will find much to like in Caroline O'Donoghue's darkly funny novel . . . A zippy, astute read." Irish Independent