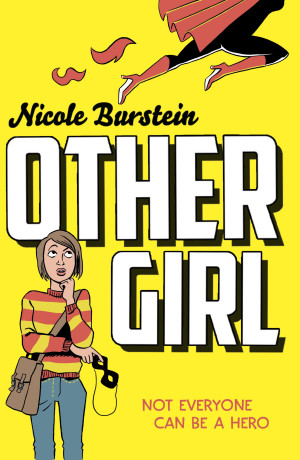 Louise and Erica have been best friends since forever. They’re closer than sisters and depend on each other for almost everything. Just one problem: Erica has superpowers.

When Erica isn’t doing loop-the-loops in the sky or burning things with her heat pulse powers, she needs Louise to hold her non-super life together. After all, the girls still have homework, parents and boys to figure out. But being a superhero’s BFF is not easy, especially as trouble has a way of seeking them out. Soon Louise discovers that Erica might be able to survive explosions and fly faster than a speeding bullet, but she can’t win every fight by herself.

Life isn’t a comic book – it’s even crazier than that.

"A heart-warming YA novel about how true friendship can survive anything, including a showdown with a gang of super villains." Sarra Manning, Red Magazine

"This book would NOT be afraid to wear its pants on the outside. Bravo, Miss Burstein!" Leilah Skelton, Waterstones Reviews

"I read this book in a matter of hours because the storyline was well paced and exciting and I found myself unable to put the book down because I needed to know what was going to happen next." Kristy, The Overflowing Library

"I really, really enjoyed this book! It was funny, thrilling and it definitely lived up to my expectations." Elizabeth, Goodreads Review

"It felt so fresh and breezy to read at times and at other times it was gripping and scary it was so incredible that I don't really have the words to explain it!" Gavriel Peretz, Amazon Review

"Smart, geeky and hugely fun, this is a superhero story from the sidekick's perspective. Great stuff!" Robin Stevens, author of Murder Most Unladylike

"This suspenseful fantasy is about growing up and finding yourself. Comical and satirical about school life and the cult of celebrity, it is enjoyably observant about the way teenagers behave." Nicolette Jones, Sunday Times

"Burstein explores loyalty, common sense and growing up in a smart, confidence-boosting comedy for 11-plus girls." New Statesman

"So much fun! ... Nicole’s passion and love for all things comic book and superhero is weaved into the story expertly ... I think Othergirl is going to be the start of a great series, with a real feel of Holly Smale’s Geek Girl about it." Shinra Alpha Blog

"Such a brilliant concept and I love the comicbook angle for girls ... There are some great comic sequences and insightful commentary on modern celebrity, but at heart this is a wise and warm story of friendship and self-belief, and just the thing to recommend to fans of Geek Girl." Ones to Watch, The Bookseller

"Othergirl is a blast. A great concept, the super-hero's less overtly super best friend, and the story is so fun you hardly have time to breathe. A great book about friendship, being in the shadows, and being proud of who you are. Kapow!" Matt Haig

"Just as fabulous as I thought it would be. Can't wait for everyone else to read it." Keris Stainton

"Highly enjoyable and clever. A wise, witty and suspenseful story about friendship. Comedies like this are a treat, and it's the best spin on Marvel since The Incredibles. I think she is going to be a star of YA fiction." Amanda Craig