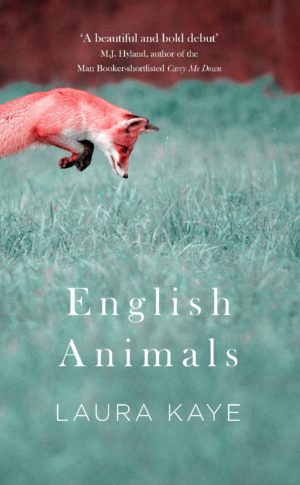 When Mirka gets a job in a country house in rural England, she has no idea of the struggle she faces to make sense of a very English couple and a way of life that is alien to her. Richard and Sophie are chaotic and frequently outrageous but also warm, generous and kind to Mirka despite their turbulent marriage.

Richard swiftly co-opts Mirka into his latest money-making enterprise – opportunistic taxidermy – and she finds that she has a natural talent for creating some unusual artworks. After a traumatic break two years ago with her family in Slovakia, Mirka finds to her surprise that she is happy at Fairmont Hall. But when she tells Sophie that she is gay, everything she has come to care about is put in danger, and she must learn the hard way what really matters to her.

English Animals is a beautifully written, subversive, funny and highly distinctive debut.  Laura Kaye is a brilliant observer of human nature, with a wonderful eye for detail and a wry wit, who, in English Animals, perfectly balances poignancy and humour.

"[A] wry and knowing debut" Stylist

"Better than a burst of February sunshine, this is a pitch-perfect story . . . A bubble of pleasurable reading" Sainsbury's Magazine

"[A] confident novel that engages with love, belonging, prejudice and, above all, quintessential Englishness" Daily Mail

"It's a long time since I've enjoyed any debut novel as much as English Animals. Its command of tone, narrative and character is so assured, and both its wit and perceptiveness about a certain kind of English life make it a joy to read." Amanda Craig