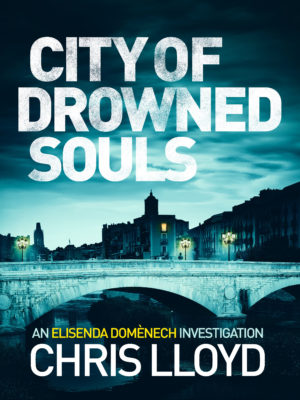 When a child disappears, the clock starts ticking…

Detective Elisenda Domènech has had a tough few years. The loss of her daughter and a team member; the constant battles against colleagues and judges; the harrowing murder investigations… But it’s about to get much worse.

When the son of a controversial local politician goes missing at election time, Elisenda is put on the case. They simply must solve it. Only the team also have to deal with a spate of horrifically violent break-ins. People are being brutalised in their own homes and the public demands answers.

Could there be a connection? Why is nobody giving a straight answer? And where is Elisenda’s key informant, apparently vanished off the face of the earth? With the body count threatening to rise and her place in the force on the line, the waters are rising…

Be careful not to drown.

'I just LOVE this series! It is one gorgeous bundle of crime filled delight, wrapped up in a sunny climate and sprinkled with Catalan culture. It feels like this series has really taken off, with City of Drowned Souls. This is the best story yet, Chris Lloyd. There is something for everyone; a stonking mystery or two with an ace twist, a cold politican, Elisenda and her counselling, loss and bereavement played out, plus more about politics of the region.' Northern Crime Blog

'Truly gripping, the stories twist and turn as we gasp in terror at the evil in the world, grind our teeth with frustration with the obstacles bureaucracy and public apathy cause and sigh with relief when Elisenda and her team take the criminals down. If you like crime fiction, you will love this series!' Scout Finch 75 Blog

'I’m always on the look out for a new crime series and this one doesn’t disappoint. In fact it brings a fresh new look to the crime thriller genre, and is set in the Catalan City of Girona. The author Chris Lloyd writes brilliantly, using his local knowledge of the area to a T, you actually feel you are right there in the story. Highly recommended for fans of Ian Rankin amd Val Mcdermid. Perfect for a lazy night in!' Rachel Bustin Blog

'I love the way Chris Lloyd writes because he does that slow burn to the finish thing that involves many moving parts, all cleverly layered and all coming together but without necessarily tying it all up in a beautiful bow. Such is the case with City of Drowned Souls, a beautifully engaging crime novel within the Elisenda Domenech investigations series. Overall an excellent read. Bring on the next one I say. You really can’t ever have too many great books to look forward to. Chris Lloyd gives good book.' Liz Loves Books Blog

'City of Drowned Souls is full of marvellous detail about Catalan politics, the locations are expertly described giving a real sense of location. Food habits, recipe ideas and dozens of subtle observations made it so very obvious that Chris Lloyd knows this part of the world very well - the detail makes the story so much more vivid and real. Nicely paced, full of puzzles (with plenty of red herrings) and a few sinister elements which were great fun to see uncovered. City of Drowned Souls comes highly recommended and I look forward to catching up with the other novels in the series.' Grab This Book, Amazon.co.uk