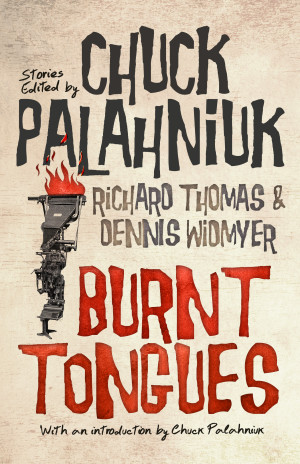 Represented in the UK on behalf of Medallion Press.

Chuck Palahniuk is best known for the powerfully subversive novel Fight Club (Vintage), which was made into a major motion picture in 1999 starring Brad Pitt and Edward Norton.

Throughout his career, Palahniuk has made it his mission to bring people back to books. In the past few years, he has taken this mission one step further by instructing people to write books. The anthology, Burnt Tongues: An Anthology of Trangressive Short Stories, features stories from twenty of Palahniuk’s online writing workshop students, whose origins span the United States and the UK. The stories they write are as eclectic as the authors themselves, with titles like “Zombie Whorehouse,” “Mind and Soldier,” and “Engines,  O-Rings, and Astronauts”. Often unsettling, always thought-provoking, and beautifully crafted, each has the common thread of a minimal writing style like Palahniuk’s.

Winner – Anthology of the Year, This Is Horror Awards 2015

"Within the covers of this wonderfully disturbing, squirm-inducing collection, you’ll find all the mortifying, self-inflicted scars you go through great pains to hide from even our closest intimates." Dino Parente, Pantheon Magazine

"Dark, subversive and disquieting fiction for readers ready to go all the way down." Kirkus

"Burnt Tongues' 20 stories 'are as eclectic as the authors themselves' ... with titles ranging from Zombie Whorehouse to Mind and Soldier." Guardian

"This is a book of spores. These stories, you breathe onto the page and they float up into your mucous membranes, their spiky edges lodging characters and voices in your head that shudder to life when you least expect it. Just when you think you’ve closed the book, it opens up all over again, inside you." Stephen Graham Jones, award-winning author