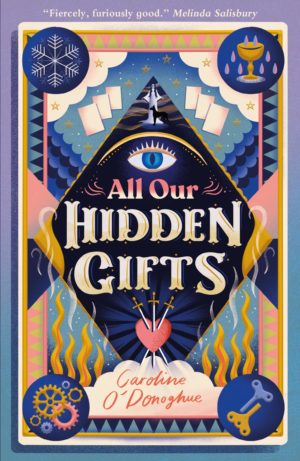 All Our Hidden Gifts

16-year-old Maeve Chambers is a loner, and has been since she ditched her best friend Lily three years ago. The sole idiot in a family of geniuses, she has always struggled to fit in. But when she finds a pack of dusty old tarot cards in a cupboard at her school, and begins to give scarily accurate readings to the girls in her class, she realises she’s found her gift at last. Things are looking up. Until she discovers a strange card in her deck – one that shouldn’t be there. Then a reading for her ex-best-friend Lily goes very wrong. And two days later, Lily disappears.

Consumed by guilt, Maeve teams up with the only two people who believe Maeve’s version of events: new friend Fiona, a talented acting prodigy; and Lily’s alluring older brother, the gender-fluid, lipstick and leather jacket wearing Roe. All three have unnatural talents that are only now waking up. Will their strange gifts be enough to find Lily and bring her back, before she’s gone for good?

ALL OUR HIDDEN GIFTS is the darkly magical first book in a new YA series for fans of Stranger Things and The Chilling Adventures of Sabrina.

"Whether you come for the mystery, the magical hijinks, or the intense teenage feelings, All Our Hidden Gifts has a lot to offer. It takes friendship seriously and treats its queer and diverse characters with empathy and respect, all while frolicking off on a somewhat batty supernatural adventure." NPR

“All Our Hidden Gifts has the most authentic teenage voice I've read in ages. It's spellbinding in its ability to tap into teen issues such as friendship power battles, self-esteem, blooming romance, and social justice and then sprinkles it with magic. I was utterly bewitched, and know I would've read this book a thousand times when I was young.” Holly Bourne

“This YA debut from Caroline O’Donoghue knocked me sideways. About tarot, the complexity of friendship & so much more besides. So gripping, so intriguing, so layered and lovely and creepy – All Our Hidden Gifts feels like a book that should have always existed. I’m glad it does.” Kiran Millwood Hargrave

"O’Donoghue’s intriguing story takes in myth, history, tensions between Catholic and Protestant, and race in Ireland. Helping the repentant Maeve search for the missing girl is Lily’s nail-polish wearing brother Roe, formerly Rory, who is the essence of fluidity in a novel that’s all about the power of liminal spaces." The Financial Times

"Deliciously witchy... O’Donoghue has a keen eye for the complexities of friendships; I predict this one will be catnip to teenage readers." The Guardian

"The stakes are high, the narrative is nuanced, and the climax and resolution are refreshingly unexpected." School Library Journal

"All Our Hidden Gifts is a magical surprise of a book, the perfect combination of heartfelt and thrilling, unpredictable and familiar. The startling and unique story lets us imagine and worry and love and reach for the truth right alongside Maeve. It is easy and exciting to get lost in this witchy, mysterious, and deeply layered story." Corey Ann Haydu

"The talented O’Donoghue turns her hand to young adult fiction with this engrossing story of tarot, magic and teen friendship that recalls the best of Diana Wynne-Jones." The i