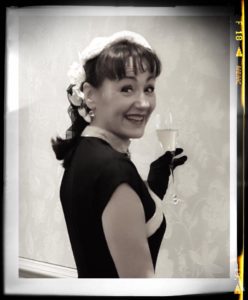 Sandra started her professional life as a jazz singer, working with big bands, mid-size outfits and small trios. As the ‘glamorous’ Miss Volare she appeared with Sugar Ray’s Flying Fortress and her own nine-piece band, Volare and the Vendettas, with whom she recorded an album of music from 1940s Film Noir, Noiresque – the Lonely Fate of the Femme Fatale. She went on to write and perform a (sold-out) one-woman comedy musical of the same name, but eventually decided writing was her metier.

Sandra has spent the past twenty-odd years as a freelance journalist and author, writing for all the broadsheets and many, many other newspapers, magazines and websites. She specialises in heritage, travel and garden writing, but is also known for quirky features about genuinely underground London, from exploring the labyrinth underneath the Cabinet War Rooms to discovering the giant wind tunnel seven storeys below the Royal Albert Hall. Sandra is the London columnist for American magazine British Heritage Travel.

She is the author of twelve non-fiction books for both adults and children, including Anthology of Amazing Women (20-Watt, 2018) which made the Guardian’s Top Children’s Non Fiction list, Atlas of Monsters (Templar, 2018) and Atlas of Heroes (Templar 2019) both of which were shortlisted for the SLA Information Book of the Year.

Sandra lives in Greenwich, south east London, where she has an allotment that looks out over Canary Wharf and keeps her self-sufficient in saffron, garlic, horse-tail and bindweed. She’s still crazy about film noir, collects vintage clothing and loves swing dance, difficult sweets, Arthurian legend and femmes fatales, though not necessarily in that order.