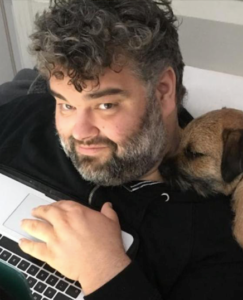 Jess’ first literary work was a poem called Snow Evil Snow, rebuking winter weather for causing injury to old ladies and clumsy children like himself. He inundated English teachers with tales of vampires in space that filled multiple textbooks, before succumbing to a penchant for writing courses; frequenting lecture rooms at London Film Academy, The City Lit, Goldsmith’s College and Lancaster University. After writing and directing several short films, he was set loose at the front of the classroom at the University of Roehampton as a visiting lecturer in screenwriting.

Taking the lessons outdoors, Jess then embarked on a career as a London tour guide, regaling crowds with over-enthusiastic accounts of the London Beer Flood, trailblazing female pickpockets and the Great Stink. Collateral damage from Jess’ walking tours included lampposts and unsuspecting passers-by. During the Covid19 pandemic, he became a director of a community kitchen that tackles food poverty and waste by providing free meals to local residents from surplus groceries. Currently writing his debut novel, Jess admits that his animosity towards snow has thawed over time.