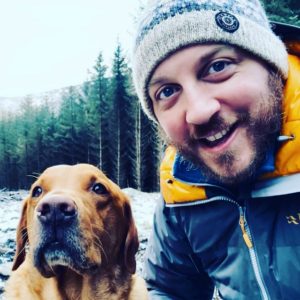 Having worked as a journalist in Catalonia and Hong Kong, Daniel now lives in Scotland where he is studying for an MLitt from the Institute for Northern Studies in Orkney. A keen crime writer since coming up with dubious Police Academy-inspired cop stories as a kid, Daniel is working on his debut novel, Dark Island – a noir thriller about autistic journalist, Freya Sinclair, who uncovers a disturbing conspiracy following the discovery of a body on Orkney’s wild Atlantic coast.

Before starting work on this novel Daniel completed the Riff Raff mentorship programme and helped start the Virtual Writing Group on Twitter (@virtwriting), which aims to connect with and support other writers. When he’s not writing or studying he’s either reading, travelling (pre-Covid!), walking in the local hills with his two dogs, Dylan and Maggie, or learning a new foreign language – this week, it’s Swedish! Tack för att du läser!!