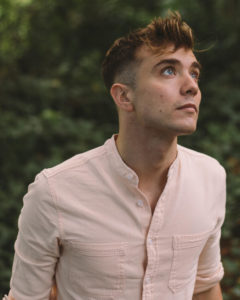 Calum McSwiggan is an LGBT+ writer and advocate who is passionate about gender and sexuality, queer politics, and LGBT+ history. Whether sharing his own personal experiences or using his platform to tell the stories of others, meaningful storytelling is at the heart of everything he does.

Having built a substantial audience online and achieved over 7,000,000 views on YouTube, Calum shares the most personal details of his life intimately and honestly, and endeavors to share not just his accomplishments and successes, but his short-fallings and failures too. As a person who is not shy of controversy, Calum is incredibly vocal about the issues that matter most to him, and is not afraid to voice even the most unpopular of opinions.

Calum hosts a weekly radio show and has produced award-winning videos and documentaries. He has worked in TV with the likes of the BBC and Channel 4, he’s covered everything from mental health to sex education in speaking engagements across the country, and has worked closely with many charities including Stonewall, Cancer Research UK, and the Terrence Higgins Trust.

He has a first class honours degree in Creative Writing; has written for LGBT+ publications like Pink News and Attitude Magazine; has contributed to Hannah Witton’s Sex Education book Doing It; and has written about his experiences from living in seven different countries on his blog Eat Gay Love.

As well as his successful career online, Calum currently works in HIV prevention and has a diverse career history that includes everything from working with tigers in Thailand, to teaching English as a foreign language in Italy, Switzerland, and Germany.

He is currently working on his first book, a meaningful travel memoir that shines a spotlight on some of the issues that affect the LGBT+ communities around the world.