We are delighted to announce that Świat Książki has pre-empted Polish rights for Caroline O’Donoghue’s darkly witty debut PROMISING YOUNG WOMEN in a fantastic deal negotiated by our co-agent Magda Cabajewska at Macadamia Literary Agency.

As the publishers of Paula Hawkins, Jojo Moyes, Julian Barnes a 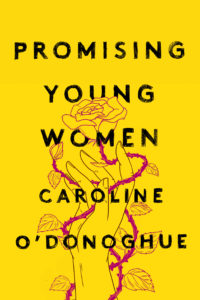 nd many more, we are positive they will make a fantastic home for Caroline in Poland.

‘I loved it. The writing is whipsmart and so witty and what Caroline O’Donoghue says about how women interact with men and work is fascinating. A fabulous and timely novel’ – Marian Keyes

“I don’t know why it never occurs to me to ask for more: to be taken to dinner, or to be given a promise, or at the very least, an explanation of why things aren’t working out with his wife. I know exactly what Jolly would say: I know because I’ve written words to mistresses before. Hundreds of them.”

On the day of her 26th birthday, Jane is recently single, adrift at her job, and intrigued by why Clem – her much older, married boss – is singing to her.

Meanwhile her alter-ego, the online agony aunt Jolly Politely, has all the answers. She’s provided thousands of strangers with insightful and occasionally cutting insights to contemporary life’s most vexing questions.

When she and Clem kiss at a party, Jane decides not to follow the advice she would give to her readers as Jolly: instead she plunges head-first into an affair. One that could jeopardise her friendships, her career and even her life.

For readers of THE COWS, SWEETBITTER or CONVERSATIONS WITH FRIENDS – as well as for fans of FLEABAG or SEARCH PARTY – Caroline O’Donoghue’s debut is a modern gothic novel about sex, power, work and being a young woman in a man’s world.