Hello and Happy New Year from all of us here at DKW!

We hope that you’ve all had a lovely festive break, and that you are all as excited about 2014 as we are. We’ve got some lovely events lined up for the new year already – talks with various writers’ groups and creative writing courses, lots of meetings with some very lovely editors, our schedule for the Bologna Book Fair in March is already looking extremely busy and – most exciting of all – we have some fantastic titles lined up for publication this year.

So, we’re back at our desks this morning, and one of the questions we’re most likely to be asked is: What did you get for Christmas? And it just so happens that Santa has brought DKW some very special (and beautiful!) bound proofs that we’re thrilled to be able to share with you.

The first to arrive in our Christmas stocking was Hideous Creatures by S. E. Lister (Old Street, May 2014) – a stunning, magical odyssey into the wild and unmapped heart of the New World. 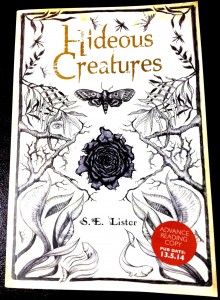 Arthur Hallingham is the youngest son of an English earl. He’s on the run from his former life – from a family where painful, half-understood secrets lurk.

Arthur travels on a slave ship to the coast of America. Amidst the teeming squalor and vaulting ambitions of the New World, he encounters Flora, the tough daughter of an outlaw, and Shelo, a native medicine man with mysterious powers who seems to have a plan for him.

The three set off on a journey through the thick forests and along the wide rivers of the lush southern wilderness. As they near their destination, Shelo’s terrible and destructive purpose is gradually revealed.

Hideous Creatures is a rich, beautiful and compelling novel that will appeal to fans of Audrey Niffenegger, Erin Morgenstern and Neil Gaiman, by a young debut author destined for literary stardom.

And then, just in time for Christmas, we received these gorgeous bound proofs of What Milo Saw by Virginia Macgregor (Sphere, July 2014) – a brilliantly heart-warming read for fans of The Curious Incident of the Dog in the Night-Time and Wonder. 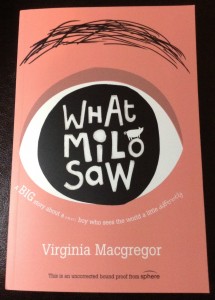 9-year-old Milo suffers from retinitis pigmentosa: his eyes are slowly failing, and he will eventually go blind. But for now, he sees the world through a pin hole and notices things other people don’t.

When Milo’s beloved 92-year-old gran succumbs to dementia and moves into a nursing home, Milo begins to notice things amiss at the home. The grown-ups won’t listen when he tries to tell them something’s wrong so with the aid of Tripi, the nursing home’s cook, and Hamlet, his pet pig, Milo sets out on a mission to expose the nursing home and the sinister Nurse Thornhill.

What Milo Saw is an emotional and moving novel about one exceptional little boy. Milo sees the world in a very special way and it will be impossible for you not to fall in love with him, savour his story and share it with everyone you know.

We’re absolutely thrilled with the way these two have turned out. They may be very different from each other, but both have such striking covers and will certainly stand out from the crowd – so keep an eye out for them in bookshops later this year. And in the meantime, look out for more news from us in the days and weeks ahead – we have some exciting announcements hidden up our sleeves – and have a very lovely 2014!